Use Steam Play in Linux Mint 18.2 with AMD GPU 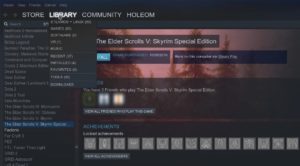 I show you how to install the latest drivers (18.30-641594 at the time I wrote this article) to finally play games using Steam Play.

Every system is different, this is mine:

I just went to the driver support site and downloaded the driver for my configuration. You’ll be redirected to a list with operation systems. Navigate to the Ubuntu x86 64-Bit section and you’ll find a part for Ubuntu 16.04.5 in there. When I went there, the version was 18.30.

The file you can download there is a .tar.xz file which can be extracted with tar -xf amdgpu-...tar.xz.

The script checks your distro and dpkg also does it. You have to let them believe, that they are on an Ubuntu 16.04.

Just make sure they look like this and save it (Ctrl+O; exit with Ctrl+X).

Not it becomes interesting: I had an older driver (amdgpu 17.40) installed and planned to just install the new driver via the amdgpu-install script, hoping, that the older driver will be removed. I think that wasn’t a smart idea.

I present a solution, that I should have done. No guarantee, that anything here will work!

First, remove the old driver according to the installation manual. So just use their tool amdgpu-pro-uninstall.

After that you can install the new driver: Switch to the directory (cd amdgpu-pro-18.30-641594/) and execute the install-script (sudo ./amdgpu-install).

I had a lot of problems with old/wrong/missing dependencies. To resolve the problems I used dpkg -r <name> to remove the old/wrong ones. Was pretty boring and slightly frustrating, but in the end the install-script worked.

These kind of errors were pretty common:
The following packages have unmet dependencies:
<name>: Depends: <other-name> but it is not installed

As mentioned above, I just used dpkg -r <name> to remove the old packages and then executed the install-script.